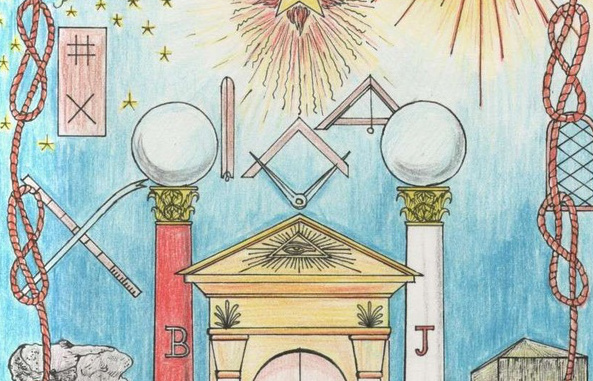 The Bibliothèque nationale de France, which holds one of the most important Masonic collections worldwide, organizes a major exhibition dedicated to French freemasonry. In partnership with the Musée de la franc-maçonnerie, it presents over 450 pieces, some of which have never been shown before. These pieces belong to the Library’s collections, to the major French obediences or to foreign institutions that lent documents on this specific occasion. The exhibition path is divided in sections organized as follows: the origins of freemasonry, how it developed in France, its symbols and rituals, its contributions to various fields – politics, religion, art, philosophy -, and eventually, the legends connected to freemasonry. The aim is to make freemasonry better known by non-specialists.

The exhibition first traces the origins – still partly mysterious – of modern freemasonry. How, in Great Britain, in the 17th century, did a brotherhood of crafts change into a society of meetings and exchanges? Some outstanding documents such as the medieval manuscripts of the Old Charges dating back to 1390 and 1425 have been lent by the British Library. The Grand Lodge of Scotland agreed to present the famous Schaw Statutes (1599) or the first ever known register of minutes belonging to a Lodge and dating back to the late 16th century... These documents will leave Edinburgh for the first time ever. Visitors will also have the opportunity to discover the original version of alchemist Elias Ashmole’s diary which relates his initiation in 1645 and the first documents of French freemasonry confiscated by the police of Louis the 15th in the 1730s.

Then, visitors are invited to discover the symbols and rituals of freemasonry. What is the ‘initiation’? How does ‘the method of symbolism’ operate? What are the major rituals? What does life in a Lodge look like? Other outstanding pieces are presented in this section such as the remarkable Manuscrits Noël (1812), true courses of mystical symbolism illustrated by hundreds of pen and ink drawings done in watercolours.

In France – from the 18th century Enlightenment to the construction of the 3rd Republic – freemasonry plays a part in public debate: tolerance, secularism, education, solidarity… The lodges leave a genuine philosophical liberalism for a republican and secular activism. Focusing particularly on a series of pieces related to the famous Loge des Neuf Soeurs, the one that initiated Voltaire in 1778 and was chaired by Benjamin Franklin, the exhibition shows how freemasonry supported the movements that gave birth to the values of 1789 and marked the Republic’s history. The manuscript of La Marseillaise by Rouget de Lisle is presented together with the accounts of the composer’s Masonic life. From Victor Schoelcher to Jules Ferry, the ‘founding fathers’ of the French Republic appear in various sequences showing their major achievements and Masonic involvement.

Eventually, the exhibition explores the imaginative universe inspired by freemasonry since its very beginning: black legend including the fantasy of a multi-shaped, colourful or virulent Antimasonry, golden legend staging freemasonry in artistic and literary fields, from Mozart’s Flûte enchantée, through Tolstoï or Kipling’s works, to Corto Maltese invented by the artist Hugo Pratt. The exhibition opens and ends with an overview of freemasonry as it is today and with filmed interviews of freemasons.